The 2015 Denver Fly Fishing Show featured great gear, fly fishing clinics, and a chance to visit with friends.  As loyal readers of this website know, I enjoy checking out new fly fishing gear.    Here are a few items that caught my attention.

The Vedavoo booth is always a great place to stop.   Scott Hunter is one of the nice guys in the business, and he makes a heck of a product.  I've been searching for a perfect Tenkara pack, and decided to order a Vedavoo Shot Pack.    I was also intrigued by the TL Sling pack.    Vedavoo has a wide assortment of packs and accessories for fly fishing, and the products are handmade in New England.   Check them out at http://www.vedavoo.com/

During the show, I spent some time looking at new Patagonia Fly Fishing gear and clothes.   I'm  a big fan of the Nano Puff that I often wear while fishing in the cold, and enjoyed checking out the Nano Puff Air that they had in the booth.    They told me that the Nano Puff Air increases breathablity , and is a great outer layer when you are engaged in strenuous activity such as a long hike into the river.  They also released a boot called the Foot Tractor that I examined.   They have changed the pattern of the aluminum bars on the bottom of the boot, and it looks like a great improvement over past models.

Fishpond makes some very innovative products, including the new Delta Sling Pack.  The pack has quite a few interesting features, including a pistol holster for those fishing trips deep in Grizzly Country.

I spent some time with the fellows at the Scott Fly Rod booth casting the new Tidal saltwater rod series.   The rod casts very smoothly, and in typical Scott fashion, the unsanded blanks and quality components make for a unique looking and well made rod.   The price point is also quite reasonable for a fast action premium saltwater fly rod.

I'm a fan of the Umpqua professional guide fly boxes, and stopped by their booth.   They have a lot of new products, but a couple that caught my eye were the Steamboat sling, and the Tailgater Organizer. 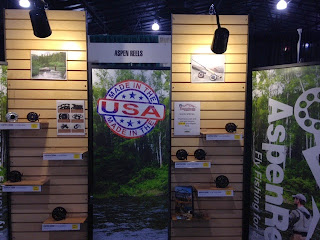 I stopped by their booth out of curiousity because I had never heard of them.    After spending some time with their representatives, I left impressed.  Aspen Reels is based in California, and has developed from a family owned machine shop.    They started making fly fishing reels several years ago, and offer a sturdy, attractive, and well made reel at a great price.    I was told that they machine all of the reels at the shop, making as many parts as they can.    The few parts they have to source they try to get from other local producers.   I examined several of the reels that they had on display, and found them to be extremely solid, with a smooth feeling drag.   The pricing on the reels are quite reasonable, the 3-4 weight large arbor reel is $230, and the 6-8 reel is $290.  They told me that they stand behind the product, and will fix/repair the reels if needed.  These reels are definitely on my short list.  http://aspenreels.com/ 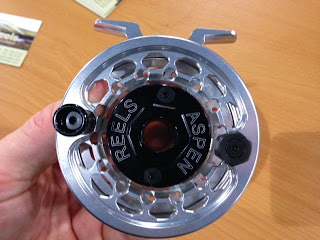