I was recently in Steamboat Springs, and fished the Yampa River.   It had been some time since I've been to Steamboat, and I stopped by a couple of fly shops, including the Bucking Rainbow.   The staff was friendly and helpful, and made some good suggestions.

The Steamboat area has a lot of great fishing, including lakes and reservoirs.  The Yampa River is the primary river in the valley, and it runs right through downtown Steamboat.   Most, if not all of the river through town is public.    During the summer, there are a lot of tubers, etc, but there is still plenty of room to fly fish.

Early one morning I headed out to the river in town, taking a moment to enjoy the clear blue skies, and the hot air balloons taking off that seem to be a staple of summertime in Steamboat.   After noting a PMD hatch, I worked a small dry for a while, with no luck.  I decided to switch to a nymph rig, and tied on a bead head hare's ear that I tie, along with a midge.   I started to drift the flies through a little eddy, and suddenly my indicator took off, and a large rainbow lept into the air, falling back into the water like the winner of a belly flop contest.   I frantically got line back on the reel and hung on for dear life, while the angry trout raced about the river.   I ran up the shore following the energetic fellow, until he decided that he had had enough, and broke my 5x leader in half.    As I stood there with my line dangling in the slight breeze, I muttered, "should have put on a 3x on for that one". 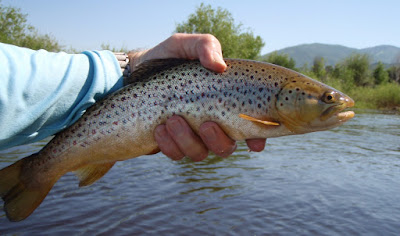 That was the biggest trout that I have fought in some time (easily 25+), and even though I didn't bring it to hand, it was a thrill.   I caught some other nice trout in the Yampa, but I regret not seeing the great fish up close.

If you are fishing the Yampa in town, prepare for nice sized trout.   I was told that there are plenty of 20-25 inch fish in that stretch.