The last cast of the day...

Yesterday I spent a couple hours on a local stream.   I hooked a few trout, but it was one of those days when the trout got away before they got to the net, which in the long run really not a bad thing since the less you handle the trout, the better off they are.   But, I still like to take in the beauty of the trout in my net, and it was not happening.    I did hook several aspen leaves, and I managed to land each of them! 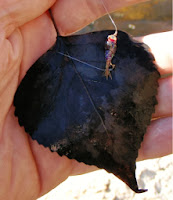 I really enjoyed myself since the weather was very nice for late fall, but the time came to head back into town.   As I walked back to the car, I decided to hit a favorite hole for a couple "last casts" of the day.   I walked down the bank, adjusted the indicator, and made a few casts into the deep pocket.   It took a couple casts to get the perfect drift in the tricky currents, but it paid off.   The indicator disappeared, and a rainbow flew out of the water after taking the zebra midge.   He was full of fight, and I had to work my way down stream as he jumped, headed behind rocks, and zigzagged through heavy currents in an effort to defeat me.   I won this particular battle, and brought him to my net.   I snapped a couple of photos, and released him back into the cold fall water.   I'm glad that I decided to make a last cast of the day in that deep pocket. 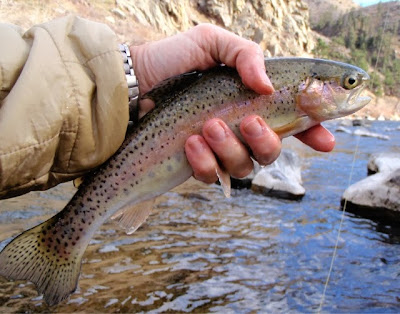 Posted by Bigdryfly at 9:24 AM